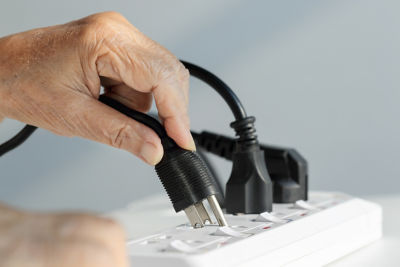 Most homes in the United States have a large number of appliances that all compete for electricity. Energy hogs like fridges, washers, dryers, and stoves reduce the amount of electricity that’s available for other equipment like computers and printers.

Have you ever plugged in something, and the lights flickered? This isn’t a sign to worry about just yet. Something that you should worry about is a power surge, and its potential to destroy your electrical equipment, including your home office which houses valuable data.

A power surge occurs when something interrupts the electrical flow, usually when an energy hog starts back up again. That interruption causes the flow of electricity to reverse itself, sending it back into the system and diverting it to other devices.

This can cause fried circuits, melted plastic, and other irreversible damages to your appliances.

You may already have some surge protection, but with threats like these, it might just be time to upgrade.

Talk to an Atlanta Electrician

Don’t take chances on power surges. Contact BriteBox Electrical Services to find out about Whole-House Surge Protection. If you’re not sure if your home is in danger of power surges, call us to schedule an appointment and we’ll take a look.

We live and work in the Atlanta area, so rest assured that we give our customers the same protection we’d want in our own homes.