Are You Getting the Most Out of Your TV? A Guide to Preset Picture Modes 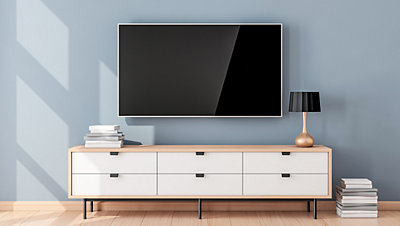 If you’ve invested in an awesome, high-definition TV without adjusting the preset picture mode, you’re doing it all wrong. These days, you can adjust your TV’s picture settings to customize everything from the color temperature to motion interpolation. But if you’re not even sure what “motion interpolation” is or you don’t feel like fumbling through all your settings, then check out your TV’s preset picture modes.

As you click through these picture modes, you’ll see drastic differences in the picture. That’s because each mode has its own locked-in settings for various aspects such as color temperature, edge enhancement, backlight, etc. So which preset picture mode should you be using? Well, it depends. We’ll go through the most common picture preset modes, describe their features and tell you when you should use each one.

The cinema picture mode (sometimes referred to as “movie”) is regarded as the mode with the most “accurate color reproduction” because it’s what directors and producers use when filming.

What it looks like: Most people say that on cinema mode the picture looks reddish, soft or dim.

That’s most likely because most viewers are used to blue-ish or cooler color temperature settings that stores typically set their TV’s to. However, cinema mode’s red tint is closer to natural coloring than all the others.

Cinema mode also offers a picture with “blacker blacks” and “whiter whites” for an overall better color presentation, especially in darker rooms. It produces the least amount of “light output” (or backlight) of all the picture presets so your black levels are optimal in this mode.

When to use it: We suggest keeping your TV on cinema all the time as this is the most “accurate” look. But you’ll especially want to use this setting when watching movies or in dark lighting conditions.

The vivid picture mode (sometimes referred to as “dynamic”) is on the opposite end of the spectrum from cinema mode: it is regarded as the least realistic picture mode. But there are still some uses for it.

What it looks like: This mode is characterized by having a “blue-ish” or cool temperature setting. Sharpness, contrast and brightness are dramatically increased in this setting and can lead to complaints that images look unnaturally bright or harsh.

Many TV picture “connoisseurs” advise against keeping your home TV set to vivid mode because it causes more strain on the eyes and colors are oversaturated.

When to use it: Because of the high color saturation levels, some store owners will keep their displayed TV’s on vivid mode. This makes the images “pop” and catches the eye better than other softer settings. We don’t suggest using it for in-home purposes, though, unless you are trying to overcome a brightly lit room.

Game mode is primarily concerned with getting rid of all video processing features to make room for faster display response.

What it looks like: Many viewers complain that in game mode, the images are more “washed out”. That’s likely because settings like contrast, sharpness and brightness are significantly decreased. The most notable difference is the decreased input lag (i.e. faster response time).

When to use it: When playing video games or watching animated movies.

What it looks like: This mode also gets a lot of complaints about an “unnatural” look. You may notice that this setting is very bright but the colors may not be as true or accurate as the director intended.

When to use it: Similarly to the vivid picture mode, natural mode is often used for display TV’s because it is bright and draws the eye in.

This picture mode is often the mode manufacturer’s set their televisions to. If you haven’t messed with the settings on your TV since you bought it, you’re most likely watching television in standard mode.

What it looks like: Moderate contrast, sharpness and brightness with a “blue-ish” hue.

When to use it: Normal, everyday watching, but we suggest against using this mode when watching higher quality imaging like movies. It’s best used during the day in average lighting conditions.

This mode isn’t so much about color display as it is about offering optimal motion interpolation (smoothness of motion).

What it looks like: Overall, you’ll notice very smooth motion (it offers a high frame rate) and slightly brighter colors (especially “sports” colors like green and uniform colors). But some say the brightness makes for a harsher picture.

When to use it: When watching sporting events or when trying to overcome a dimly lit room.

BriteBox Electrical Services in Atlanta offers the best when it comes to advice about your home entertainment equipment. From TV mounting to home theater installation and design, BriteBox is the company you can turn to for expert home entertainment system help.

Have questions? Want to improve your TV watching experience?